Mike Tyson vs Roy Jones Jr.: A Battle of the Titans

Two boxing legends who captured the eyes of millions around the world in the ’80s and ’90s are going to entertain once again in late November when Mike Tyson takes on Roy Jones Jr.

For “The Baddest Man on the Planet,” this will be the first time he competes in a boxing match since 2005, while “Captain Hook” has been more active, most recently fighting in 2018. These two fan favorites will take the ring for eight rounds in an exhibition bout on November 28 at the Staples Center in Los Angeles, California. Let’s take a closer look at the Mike Tyson vs Roy Jones Jr. stats.

Mike Tyson By the Numbers

Mike Tyson: The baddest man on the planet

Not only “The Baddest Man on the Planet,” but for many people Tyson was also the scariest man on the planet. “Iron Mike” wasted no time putting his opponents away in devastating fashion as he climbed the heavyweight ranks in the early ’80s until he won his first world title in 1986. He won that WBC crown with a second-round knockout of Trevor Berbick at just 20 years old.

Lightning-fast with his powerful hooks, Tyson’s footwork and head movement made him incredibly tough to hit as he entered striking range quickly. “Iron Mike” didn’t taste defeat until February 11, 1990, against Buster Douglas (a 42:1 underdog) in Tyson’s 38th pro fight. Overall, 37 of Tyson’s 58 bouts ended in the first three rounds, including 34 knockout wins for him over that span.

The first memory many people have of Roy Jones Jr. is from the 1988 Seoul Summer Olympic Games. Jones Jr. won the silver medal in the junior middleweight division in what is arguably the most ridiculous decision in boxing history — and there have been plenty of them.

To this day, Jones Jr. is the only man to ever endure a full round in which a punch was not recorded against him, offering a glimpse of how stealthy and difficult it was to hit “Captain Hook.” His footwork and feints kept opponents on edge. Combine this elusiveness with his powerful hooks and it’s no surprise that this man was named “Fighter of the Decade” for the ’90s.

Everyone has a plan ‘till they get punched in the mouth. Mike Tyson

A wager on Roy Jones Jr. will yield the most profit, but Tyson is the obvious favorite here. If you want to cover your metaphorical bases, you could wager some money on each (knowing you’ll take a hit) and potentially parlay your winnings to another match, the undercard — Nate Robinson vs. Jake Paul — or some prop bets, perhaps?

Many people looking at this fight must be thinking, “can both of these boxers be the favorite?”. Unfortunately not, and sportsbooks have listed Tyson as the betting favorite with Jones Jr. coming back as the underdog. It makes sense, though, as “Iron Mike” had been an underdog just once in his career, when he fought the last undisputed heavyweight champion, Lennox Lewis, in 2002.

When this fight was originally announced, the odds were actually flipped with Jones Jr. the betting favorite and Tyson coming back as the underdog. The public licked their chops at the opportunity to bet on the “Baddest Man on the Planet” at plus money, especially after seeing his training videos with Kings MMA coach Rafael Cordeiro, who trained other stars such as UFC legend Anderson Silva.

HOW HAVE THE BETTING LINES SHIFTED SO FAR?

One thing is certain, Mike Tyson has been the favorite more often than not since the fight odds were first released. 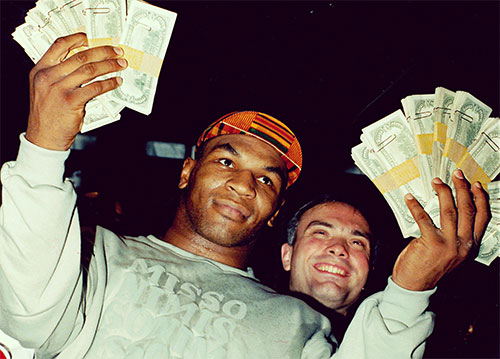 When odds were offered in July, Jones Jr. was a slim favorite at -135 with Tyson listed at -105. “Iron Mike” quickly became the favorite, though, and his odds jumped to -200 in early October. Since then, bettors haven’t looked back with Jones Jr. solidifying his role as the underdog as the main event approaches.

The numbers from the cruiserweight fight have been more interesting, though, with 27 percent of wagers placed on Jake Paul, and a surprising 66 percent of total money thrown down on the YouTube star.

Although Mike Tyson vs Roy Jones Jr. will be the main event of the night, fans will also get to see YouTube star Jake Paul settle his beef with former NBA Slam Dunk champion and point guard Nate Robinson in another exhibition boxing bout.