How Do NFL Computer Picks Work?

The above table displays computer picks based off the last 100 games played in the NFL. Confusing? Worry not football fans - listed below are a few key terms to help guide you through our NFL computer picks table as efficiently as possible so that you're better equipped to make NFL picks and parlays at the best online sportsbooks.

Add Another NFL Sportsbook To Your Roster

Units Of Profit For NFL Picks: Opening And Closing Odds

This is a computer-generated opening and closing line that calculates the last 100 NFL picks made based on a bettor placing $100 on each game. “To Win” indicates any NFL picks straight-up or moneyline bet that the player wins. “ATS” is a representation of the record based on wagers against the spread. “Total O/U” shows the record for both OVER or UNDER picks.

The 2021-2022 NFL offseason saw some very big changes take place, which impacted the NFL season schedule forever. The topic of the NFL expanding to a 17-game regular season had been discussed for a number of years and after the expansion of the NFL Playoffs, the NFL regular season now consists of 17 NFL football games as opposed to 16.

The National Football League regular season wraps up on January 9th, 2022, and the NFL postseason kicked off on January 15th. Super Bowl 56 is slated for Sunday, February 13th at State Farm Stadium in Glendale, Arizona, where the Arizona Cardinals play their home games. 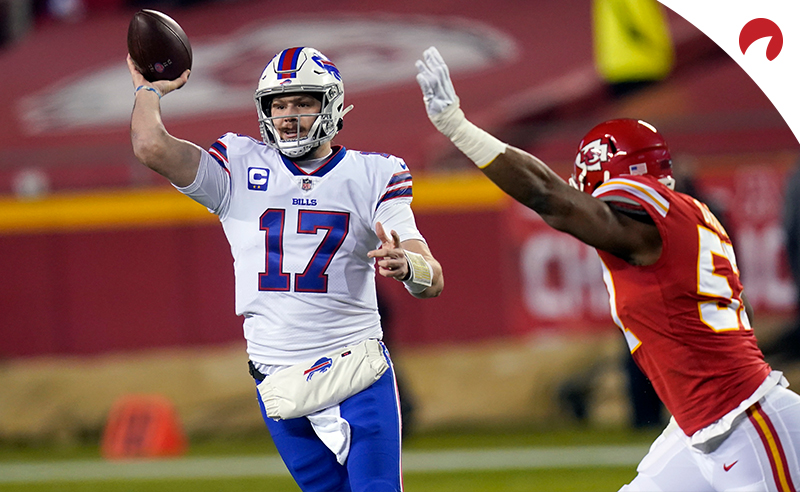 Our computer generates expert NFL picks online and expert NFL predictions that can help you cover the point spread for every game. Review our computer’s NFL picks for this NFL week and take advantage of free picks before you place any money on the NFL wagerline.

Humans are biased and their opinions color their decisions. Machines don’t care if you have a man crush on Aaron Rodgers or despise Tom Brady. If the stats say Green Bay is the team to win and the Tampa Bay Buccaneers will lose, then the computer will tell you - the Packers will win and the Bucs will lose by a field goal.

This is why advanced stats have grown in popularity for fantasy leagues, pro sports teams, agents, and even the general stats geek. And it's why NFL computer predictions are coming to be relied upon more than the screaming, angle-quoting handicapper.

NFL Picks Against The Spread

Picking NFL winners against the spread is one of the toughest tasks in sports betting. Professional handicappers can sell you their NFL picks ATS and you can try to figure out NFL picks ATS yourself, searching through:

Increasingly, bettors are relying on computers to do the work, to come up with unbiased, stats-focused predictions on NFL games tonight and throughout the regular season, including the Super Bowl. Of course, the output is only as good as the input. If the stats are accurate with significant handicapping measurements and if the formulas or algorithms are solid, then the resulting NFL computer selections can be reliable.

Our free NFL picks at Odds Shark are generated by a computer algorithm that accounts for metrics such as injuries, the time of day, which day of the week it is, recent records, recent matchup records, and much more.

If you aren’t entirely sold on which NFL team will win in any given football game, or you’d rather bet on the match itself instead of a particular team, get in on the betting action with totals picks. As opposed to taking a side, you wager on whether both football teams will combine for a final score of more than (over) or less than (under) the total number of points set by the oddsmakers.

Totals picks make late-game drives in matchups that are well out of reach exhilarating as they have the potential to push the points total over or under the line that was set. Odds Shark previews every NFL season game, offering expert analysis along with NFL betting picks on the over/under market.

With NFL moneyline picks, you bet on a winner or a loser without any NFL spread. If you’re an underdog type of person, moneyline bets are great as far as increasing your profits go. For example, if Lamar Jackson’s Baltimore Ravens are a +10 against the spread vs Patrick Mahomes and the Kansas City Chiefs, they could be up to +450 on the moneyline to win outright, which means a $100 wager would payout $450.

Depending on how complex (does it include player data, weather variations, and depth chart consideration?) the formula is, you could have success with picking more NFL winners at sportsbooks online. Of course, naysayers will always argue that a coin toss or some zoo animal will be able to do just as well predicting a Thursday night football score, but those are true flukes.

Computer picks have a basis in fact and stats. It's just a question of finding the right mix of data and math. But don't forget to weigh handicapping factors that you believe are relevant and important, like how an offensive line will hold up against the pass rush of the opposing defense or just how strong Josh Allen's passing game is. If you pinpoint that perfect mix, you should be able to find edges and advantages that you can exploit at the sportsbook window each Sunday (or Monday or Thursday).

No, as nice as that would be, unfortunately NFL computer picks do not always guarantee a winning wager at your favorite NFL betting site online. If NFL computer picks were to always win, then there would essentially be a screeching halt to betting on the National Football League, as sportsbooks would lose everything and cease to exist.

Why should I choose NFL computer picks?

Are NFL picks services worth it?

$60 BONUS On Sign-Up
Get Picks
Our Review
Top Pick